Susceptibility of animals to SARS-CoV-2 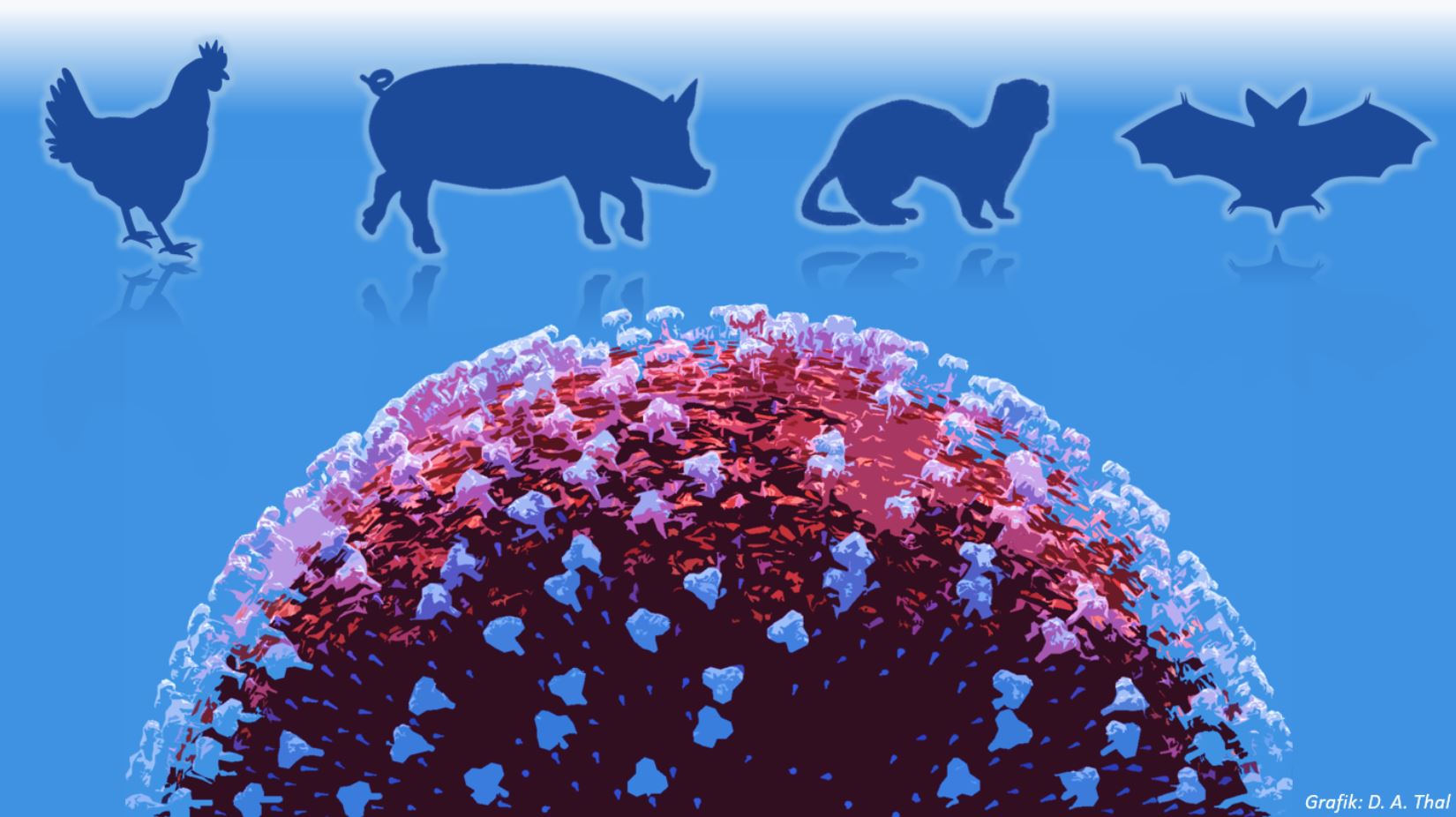 More than 60% of all emerging infectious diseases in humans are caused by pathogens of zoonotic origin, i.e. pathogens that originate from animals [1]. A zoonotic origin is also probable for the coronavirus SARS-CoV-2. However, the rapid spread of COVID-19 throughout the world is characterised by human-to-human transmission. However, two questions remain unclear: 1. From which animal was the pathogen originally transmitted to humans? 2. Can other animals in the vicinity of humans, such as farm animals, be infected with the virus or act as a further source of infection for humans? The Friedrich-Loeffler-Institute (FLI) is the German Federal Research Institute for Animal Health and is entrusted with the protection of the health of farm animals and the protection of humans against zoonoses. Accordingly, both questions fall under the responsibility of the institute and are being investigated there. Three young scientists from the German Research Platform for Zoonoses are involved in the studies: Dr. Annika Graaf and Dr. Kore Schlottau from the Institute of Diagnostic Virology (IVD) and Dr. Melanie Rissmann from the Institute of Novel and Emerging Infectious Diseases (INNT). Some results of their investigations have now been published in a joint publication [2] with other FLI researchers in the journal "The Lancet Microbe". We talked with the three scientists about the results, their significance and the current research situation in general.

Dr. Graaf, Dr. Rissmann and Dr. Schlottau, first of all, congratulations on the publication of your article. What questions were addressed in it?

In the study we investigated the susceptibility of four different animal species to the coronavirus SARS-CoV-2. We also wanted to identify any possible distribution of the virus in the animal organism and possible transmission routes. Firstly, this was investigated in chickens and pigs. These are established farm animals in Europe and the question arises to what extent the virus poses a health risk to the animals. On the other hand, investigations were carried out with Egyptian fruit bats as model animals for a reservoir host. Since a close relative of SARS-CoV-2 has been detected in horseshoe bat, bats are very likely to be reservoir hosts. The Friedrich-Loeffler-Institute has a well characterized laboratory colony of fruit bats, which could be used as model animals. Ferrets were investigated as the fourth animal species. This species is already a well-established animal model for respiratory infectious diseases (e.g. influenza) and can therefore be considered for studies of vaccines and therapeutics.

The four animal species were exposed to SARS-CoV-2 via the nose (intranasally inoculated). In addition, healthy contact animals were also examined to see whether the animals could infect each other.

What were the main findings of the study?

How do you interpret these results?

Pigs and chickens do not appear to be threatened by the virus, which is an important message for livestock farming. Fruit bats show characteristics of a reservoir host. This observation supports the assumption that SARS-CoV-2 is originally from bats. The ferrets show symptoms similar to a mild infection in humans. Ferrets could therefore be a suitable model for testing vaccines or antiviral drugs.

Genetically speaking, the pig is very similar to humans. How do you explain the fact that it is nevertheless not affected by the virus in your investigations?

To enter the cell, the virus binds to the ACE2 receptor. There is a study that shows that the binding site of this receptor in pigs should actually match SARS-CoV-2 (keyword: key-lock principle) [3]. However, cell entry is a multifactorial process and we do not yet know enough about possible co-factors etc. Further research is needed to fully understand the entry of the virus into the cell and thus to be able to say in which species this works and in which not. In addition, other factors, such as innate immunity, also play a role in the susceptibility to a virus. At this point, of course, one must also bear in mind that our research is a pilot study with a small number of animals of one breed and age group. However, our results are consistent with the results of studies carried out by other research groups. 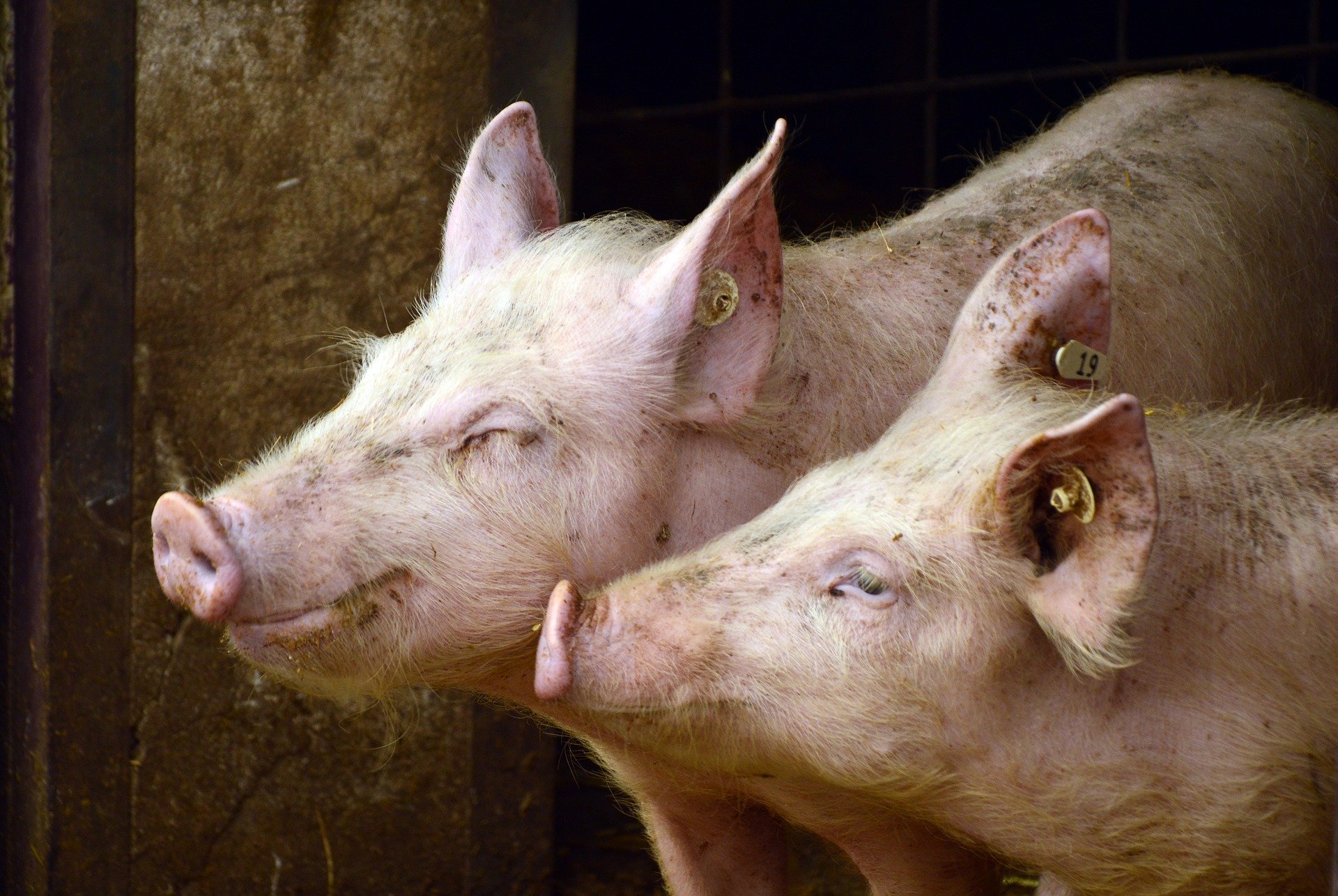 Fig. 1: Pigs are genetically very similar to humans. However, they were not infected with SARS-CoV-2 in the study. What protects them from infection is still to be investigated. Picture: pixabay

Chickens and pigs are kept as farm animals and therefore have contact with humans. How do you estimate the risk of the pathogen being transferred to this species at a later stage?

We have not been able to infect chickens and pigs under our experimental conditions, and other groups have not been able to do so either. There is also no evidence of infections in farm animals from the field. Nevertheless, it should be noted that the transfer of a pathogen to another species is favoured by certain factors. These naturally include spatial proximity and the frequency of exposure. Overall, we estimate the risk here to be rather low, but further investigation or monitoring should be carried out on a case-by-case basis.

You conclude from your results that the ferret could serve as a suitable animal model to study vaccines and therapeutics against SARS-CoV-2. In the meantime, however, many candidates are already in clinical trials in humans. Do you still think that an animal model is necessary?

Animal models are an important component for the precise characterisation of a drug and for safeguarding against potentially severe side effects. Therefore, they are still indispensable in the initial phases of the development of a therapeutic or vaccine. In addition, there are some preliminary investigations, such as challenge trials, which are ethically unfeasible in humans. We therefore still need animal models for new active substances.

The current pandemic is characterised by human-to-human transmission. Why is the role of animals relevant nonetheless?

On the one hand, it is about being able to assess the risks for and through farm animals. But the role of pets is also important, as they may also infect humans or act as carriers of disease. We must also assume that the pathogen has its origin in the animal kingdom. Finding the reservoir of the virus can help us to trace the origin of the pandemic and thus develop preventive measures for the future. Over time, a new reservoir for the virus can also establish in a new animal species. And of course, as just mentioned, suitable animal models are still an important element in the development of vaccines and therapeutics.

You usually all three work on different pathogens. How did this joint work come about?

It is true that our research usually focuses on different viruses. However, all three of us have experience working with highly pathogenic agents. We have now been able to bring this expertise together in our joint research on SARS-CoV-2. In addition, we have all been able to contribute our individual knowledge of working with the different animal species we have studied. By complementing each other's knowledge and experience, the realization of the presented research work was possible. 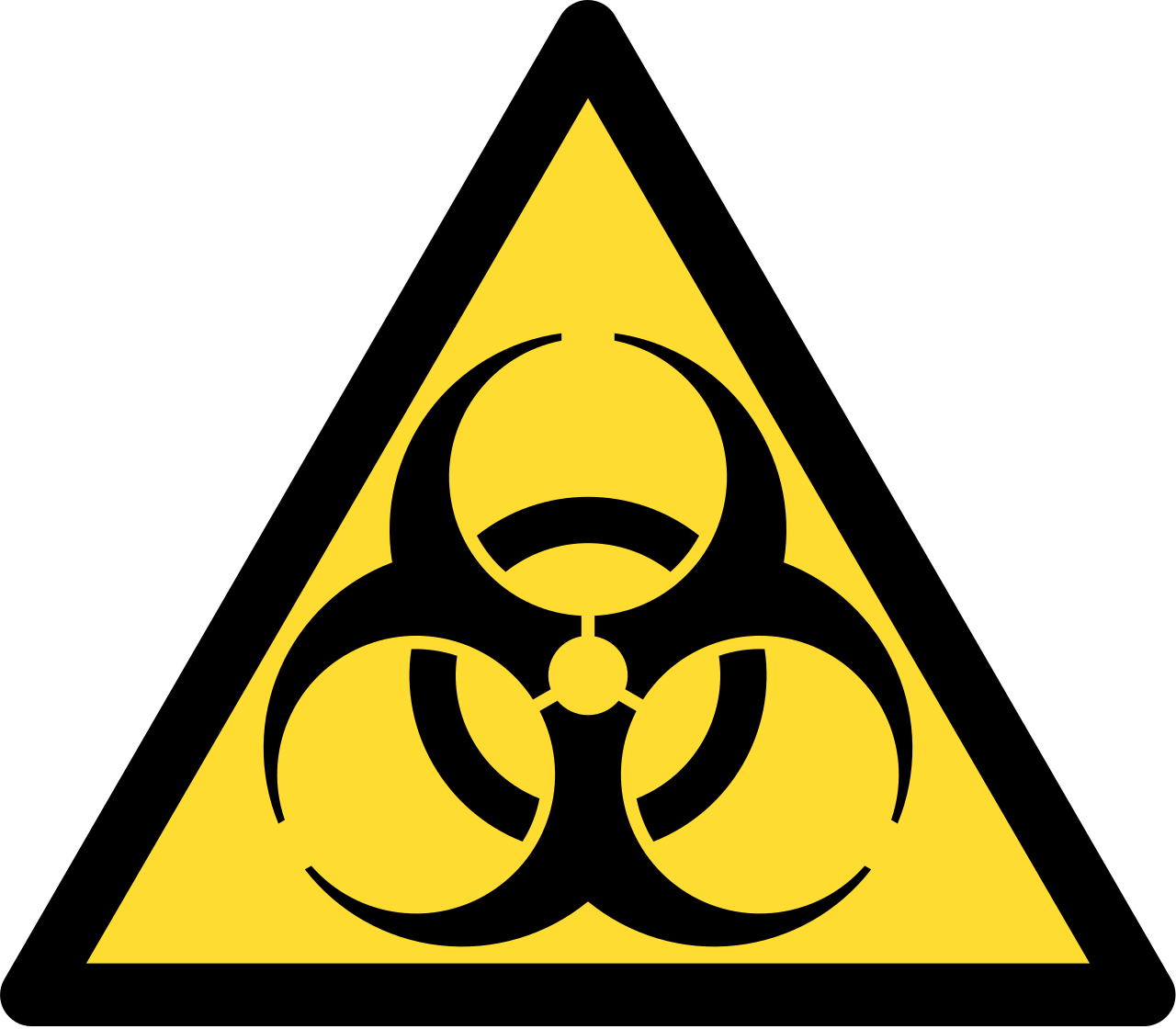 Fig. 2: Biohazard - In Germany, work with SARS-CoV-2 is carried out under safety level 3 (S3), the second highest safety protection level. Research under S3 conditions requires special training, which our three interview partners all completed during their educations.

The coronavirus pandemic has accelerated research on numerous levels - curse or blessing?

On the one hand, it is of course great that the publication times of scientific journals have been shortened enormously. In some cases, one has to wait up to a year before one's own research work is published. In addition, the availability of research data in the form of so-called preprints, i.e. publications that are published prior to the standard review process, enables a much faster exchange of information in science.

On the other hand, one also has the feeling that the high speed with which results are published is partly at the expense of quality. Some hastily published studies lack the usual depth and some points are not considered or at least not in the usual detail. Considering the enormous amount of new studies on SARS-CoV-2 that are published daily, you can't keep up with the reading, so you have to be careful that good studies are not simply lost in the flood of publications.

Of course, it is important that we find quick answers in research for the current pandemic. However, this should not be at the expense of quality, and in the long term other areas of research should not be lost from sight. That would not be sustainable.  After all, the next pandemic could also be caused by an influenza virus, a flavivirus, a henipavirus or some other pathogen. 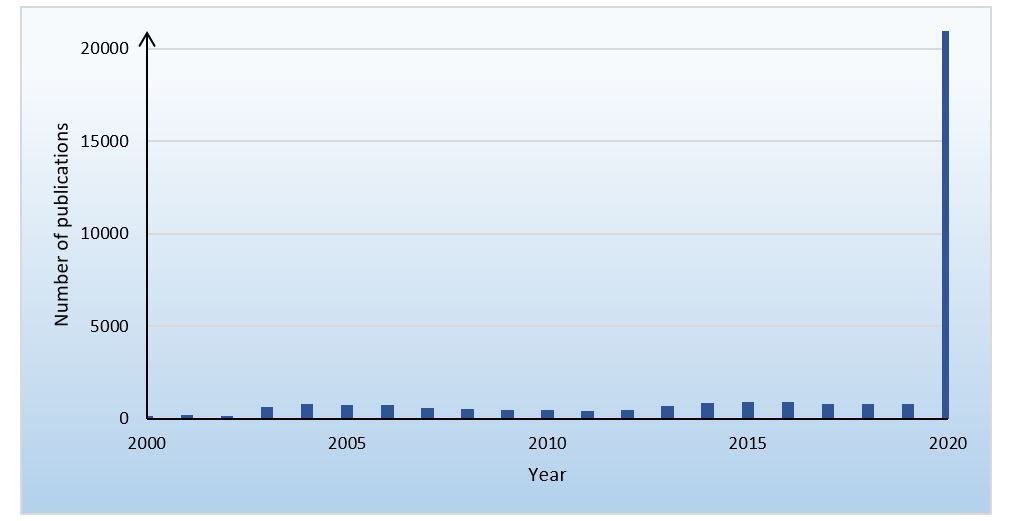 Fig. 3: Rapid increase in research activity on coronaviruses in 2020. The graph shows the number of scientific publications on the search term "coronavirus" at Pubmed by year of publication (accessed on 15.07.2020).

Do you believe that the international and interdisciplinary cooperation in research, which has been strengthened by the pandemic, will continue beyond the pandemic?

In any case, the current situation has reaffirmed the relevance of international interdisciplinary cooperation. However, there is still a lot of potential for improvement, especially in the cooperation between human and veterinary medicine, as the topic of "diagnostic capacities" has demonstrated. It would be desirable for the pandemic to lead to further strengthening and expanding cooperation in science in the future.

Dr. Graaf, Dr. Rissmann, Dr. Schlottau, thank you very much for the interview!

Interview: Dr. Dana A. Thal for the German Research Platform for Zoonoses

Zoonoses of the Month March

A pathogen that has already been equipped as a biological warfare agent due to its environmental stability and high infectivity - our "Zoonosis of the Month" March is quite something. What's more...