Science communication is more than explaining 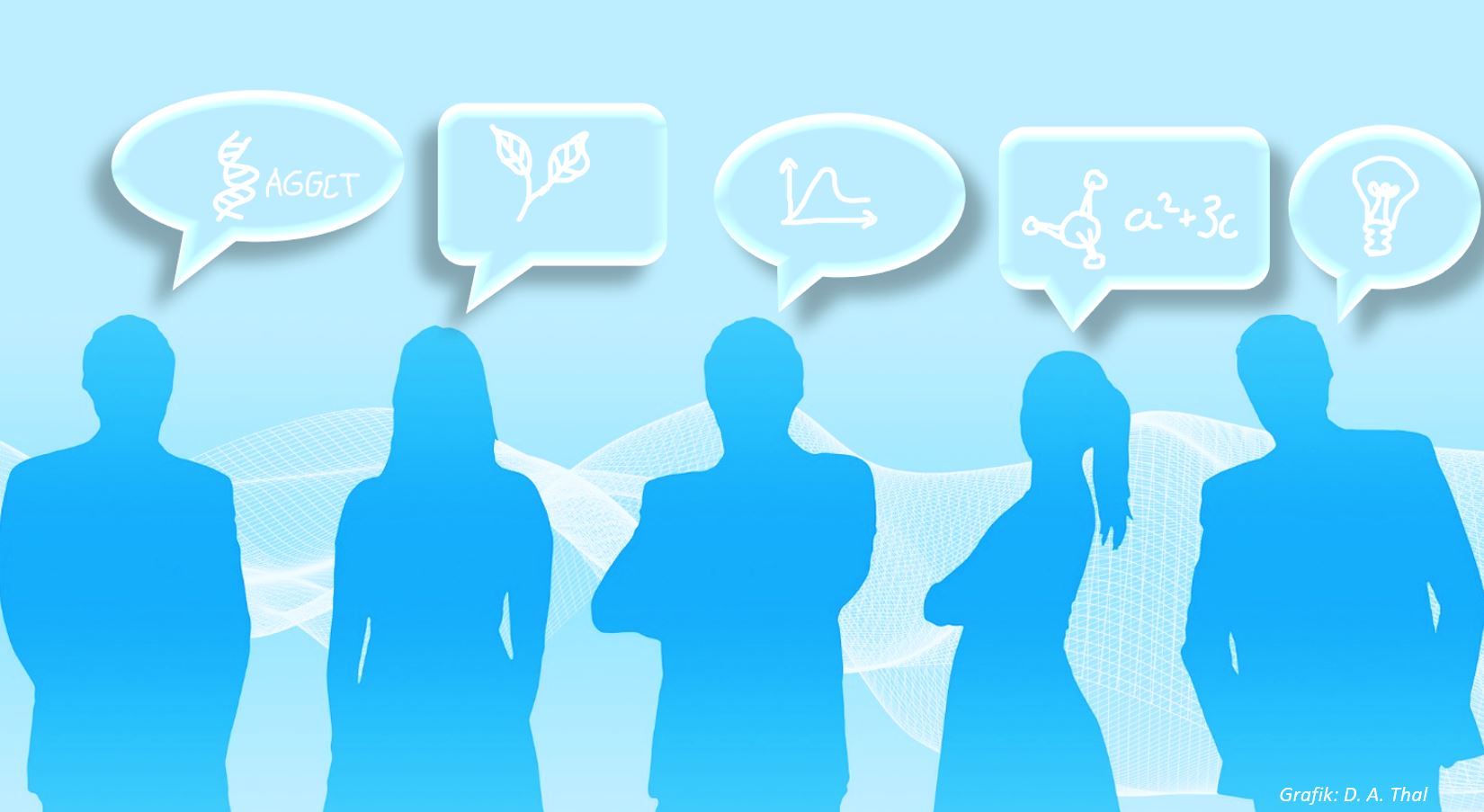 Science communication is an important part of research. Without it, the transfer of new findings from research into practice would not be possible. Especially in the face of the coronavirus pandemic, it is clear how important "good" science communication is and that it can be much more complex than many initially assume. "It is not just a matter of explaining what a virus is. It is much more than that," says Prof. Dr. Leßmöllmann. She is professor of science communication with a focus on linguistics at the Karlsruhe Institute of Technology (KIT). Prior to that, she was Professor of Journalism with a focus on science journalism at the University of Applied Sciences in Darmstadt, worked as a freelance science journalist and was editor at Gehirn&Geist/Spektrum der Wissenschaft. We spoke with her about science communication in the present time.

Science communication is important because it brings everyone - citizens, politicians, company bosses, NGOs etc. - into conversation about science: its results, its methods, its ways of thinking. Anyone dealing with science has a very powerful tool in their hands that helps to draw conclusions and prepare decisions for everyday life or for politics, but also for business. It must be clear that science produces a lot of unknowns or uncertainty, that is its job. It is not a fact machine, but produces findings that can be shaped into facts over a long period of testing, which can then be found in textbooks. In times of scientific uncertainty - keyword corona - science often cannot provide the hard facts that e.g. politics wants. Understanding, accepting and above all dealing with this is a very important subject, but also a goal of science communication. It is therefore not only a matter of explaining in an understandable way what a virus is. It is about much more. It is about a dialogue with all potential social addressees about how science works and how it can become a good basis for orientation knowledge in this complex world.

"Scientist today are always in the public eye"

The image of the scientist quietly researching in his little room has long been outdated. Today, networking in science and the international presentation and publication of one's own work have become essential. How has science communication changed in recent years, also with regard to social media?

Leßmöllmann: Scientists today are always in the public eye. When Virologists upload a result to a preprint server - which is the starting signal for an inner-scientific discussion - this can be noticed, taken up and discussed by journalism and the public. And also, as the BILD newspaper did, be used against him or her. In other words, inner-scientific communication on digital platforms, or teaching uploaded to YouTube, etc. - very quickly end up in external scientific communication. The spheres are no longer strictly separated. That is why scientists should be very familiar with media, but also with society. After all, it is not only a matter of dealing well with media tools. It is also about understanding how people live today, what fears they have, how much scientific progress or technical innovation is relevant for them. We are no longer living in the 1950s, when technological promises could be used to create communicative resonance. After all, science always lives by a promise of the future: "We will find a solution, we will create a product." But this future narrative is meeting with very different social resonances today than it did in the past.

And as communicating scientists, you get to hear or feel this, also in the social media. They can be a great space for communication, but there can also open up abysses. When criticizing social media, however, I think it is important to consider not only the echo chamber and filter bubble effects that can certainly be created by them. But also to ask oneself: Why do people, for example, withdraw into pseudo-scientific circles? Why do they feel safe and secure there, strengthened - and why not in scientific circles? These are the questions that science communication must face.

"Science is not a fortune-telling box where you put a coin in and the answer comes out at the bottom."

In conversations with friends and family, one often experiences a great discrepancy between research and the demands placed on research by society. While scientists are never 100 percent sure and often have to adjust their assessments based on new findings, society wants clear and quick answers, e.g. on how research results can be applied in practice. How should this difference be addressed?

Leßmöllmann: That is the huge challenge. It can only be done by clarifying that science does not work like this. Instead, politicians and the public must be able to draw the right conclusions for possible implementation from the scope of possibilities that science offers. I would answer your question like this: Science is not a fortune-telling box where you put a coin in and the answer comes out at the bottom. Rather, it is a very complex structure from which, over time, some results can be worked out that can then be applied in practice. Actually, it is a strengthening of society and also of politics to actively enter into a dialogue with research and to work out the following questions: What conclusions do we draw from these results? What is best for society? After all, it would be a form of immaturity to simply request results from science and then implement them. Complex societies do not function that simply. Especially in Corona times we live a daily, hourly experiment. Instead of complaining about it, we should take the offensive, discuss the scientific results and train our conclusion and decision-making muscles - both in everyday life and in politics - instead of moaning that science does not provide facts.

“Titles and teasers have to be written much, much, much more accurately and carefully“

The systems of science and journalism differ significantly from each other. Christian Drosten, virologist at the Charité, has complained in the past about his statements being greatly truncated and about misleading headlines (NDR Podcast: Coronavirus-Update). Is science communication via the usual media (television, newspapers) possible at all? What is your opinion on this?

Leßmöllmann: Yes, it's possible, absolutely, science journalism did an excellent job, especially in Corona times, even if there was justifiable criticism in detail. But: Some technical aspects have to be improved. People often only read titles and teasers that are distributed via the social media. They are the showcase of journalism, people/ readers think: What is stated in a Facebook post of the "Tagesschau", for example, that is true, and then I judge the article (even if I haven't read it), or public television, or even the whole journalism based on that. This is fatal and lamentable, but it cannot be changed. That's why titles and teasers have to be written much, much, much more accurately and carefully. Not on clickbait, but adjusted to the appropriateness of the situation and in consultation with the author of the text to which the teaser refers. And certainly social media editors are not allowed to exaggerate what is in the article or even turn it into the opposite.  This undermines trust in journalism. So you have a very big responsibility. (By the way, this also applies to the PR departments of scientific institutions, which also write teasers or social media posts - there exaggerations or distortions are also not indicated.)

But: journalism has certain system logics and thus standard operation procedures that it cannot ignore. A teaser, even if it were excellently made in the above sense, is still a teaser, and not a scientific paper. It has to shorten certain things and it has to arouse curiosity and the desire to read on.It will therefore often be too imprecise for a researcher.  But not every inaccuracy is an unforgivable distortion. Here scientists need to take a closer look:  Where are they misrepresented, and where "only" journalistically pointed in a still forgivable way? I have followed Christian Drosten's media criticism intensively on Twitter, among others, and quite often he is right. But with all due respect, he's not right about one or two criticisms of teasers either. That's why a qualified examination of the media and its logic is so important for researchers, especially in leading and media-prominent positions.

In the communication of research results, things can also go wrong, as we have just seen with the so-called "Heinsberg Study". What advice do you give scientists for good science communication?

Leßmöllmann: You should not put yourself in the service of politics. If a certain political decision is predetermined or desired, then from a political point of view it is completely justified. But research must be free to produce results that may conflict with this political direction. The credibility of science can suffer when it acts guided by interests.

What does the coronavirus pandemic and the resulting increased interest in research mean for science communication? Has this changed anything?

Leßmöllmann: Science communication and research into it have moved up the agenda even more than before. I think it has also become clear that science communication is not just about conveying information in an understandable way. It's also about entering into a dialogue, which is certainly full of conflict, with people who reject science or consider scientifically motivated political decisions to be undemocratic. How close science communication has come to questions of democratic theory on the one hand and to questions of successful, good policy advice on the other hand due to the Corona crisis, has certainly increased attention once again. Many other questions, such as the credibility of scientific experts and how to deal with conspiracy myths, have become even more virulent. I hope for more research, but also practical reflection on what actually happens when science communication is badly done or goes wrong, and how it is even possible in the current media world.

“young scientists are not sufficiently prepared“

Leßmöllmann: They are not sufficiently prepared. There is too little reflective knowledge about the interplay or even the conflicts between science and society, and too little reflection on the current media system. We could do a lot more about that.

Prof. Leßmöllmann, thank you very much for the interview!

Interview: Dr. Dana A. Thal for the German Research Platform for Zoonoses