Final symposium of the zoonoses associations RESET and MedVet-Staph

In the period from 26-28 April 2017, scientists met in Berlin on the premises of the Federal Institute for Risk Assessment (BfR) to present and discuss the research results of the two consortia on antibiotic resistance RESET and MedVet-Staph, which have been funded since 2010. The event was aimed at the public, experts (including human and veterinary medicine, microbiology, epidemiology), the Public Health and Veterinary Service (ÖGD) and ministries.

On the first day of the event, the results were presented in lectures and a press conference, focusing on the consequences for the Public Health Service, administrative and political action. In the following days, the contents of the lectures were increasingly geared towards the scientific expert audience and the scientific results of individual project partners were presented. In addition, the two invited speakers Prof. Dr. med. vet. Lothar Wieler, Robert Koch Institute, Berlin, and Prof. Dr. med. Alexander W. Friedrich, Universitair Medisch Centrum Groningen, Netherlands, examined the topic from their own perspectives.
During the final colloquium, the results of the network were discussed in an interdisciplinary way and open research questions were defined. The event also served to deepen project ideas and discuss the basis for new research collaborations.

MRSA and ESBL - many differences despite similarities

The two pathogen types under consideration, MRSA or multi-resistant staphylococci and ESBL-producing Enterobacteriaceae, have common features in terms of their general spread and relevance for patients. Nevertheless, there are also significant differences, including (zoonotic) transmission routes and persistence on surfaces. In both consortia significant progress has been made in all areas. In the field of diagnostics, this also included the collection and analysis of sequence data. The systematic collection and analysis of data made it possible to create a comprehensive understanding and thus an evaluation of the current situation, but also to identify new and rare resistance genes. In the RESET research network, a common database was developed for the management of these data, which was actively used by all network partners.

The lecture abstracts were compiled in a printed conference proceedings. The workshop received a very positive response, and members of the network have subsequently received several press enquiries. 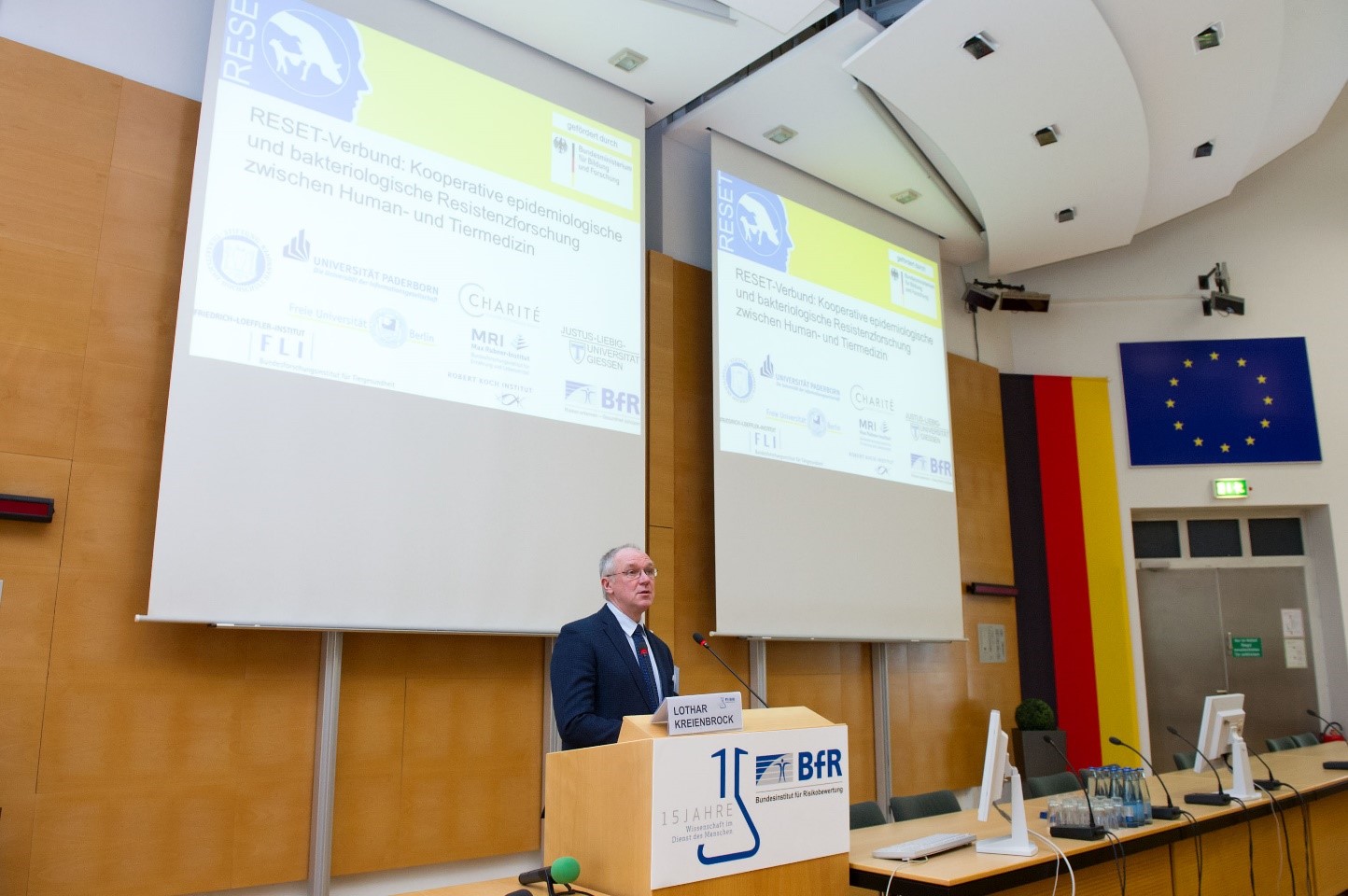 Prof. Dr. Lothar Kreienbrock opened the final symposium of the RESET and MedVet-Staph networks on 26 April 2017 on the premises of the Federal Institute for Risk Assessment.

Press conference on 26 April 2017 during the event. 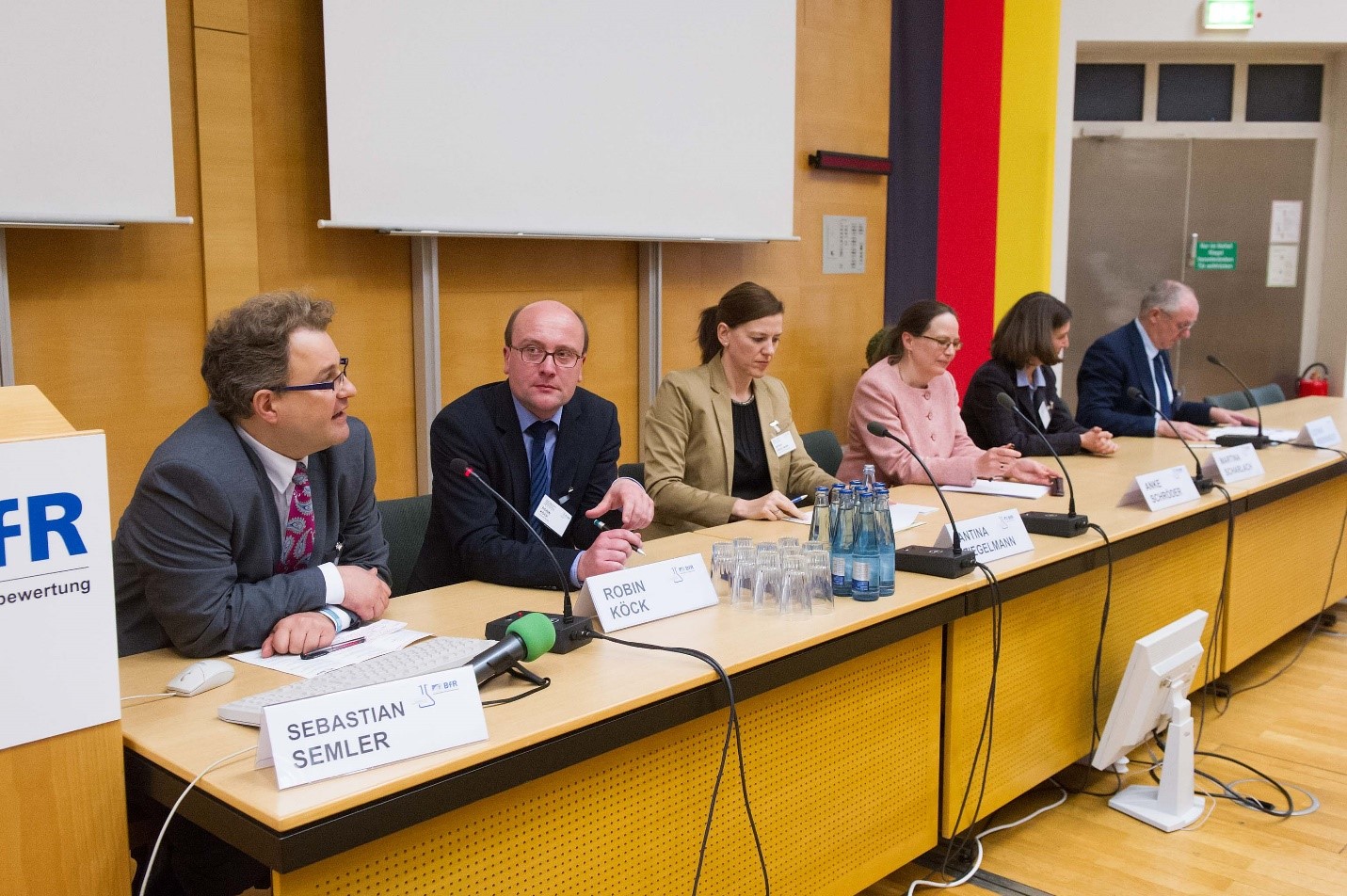 Panel discussion on the research results on 26 April 2017, moderated by Sebastian C. Semler, TMF. Discussed with (from left to right): PD Dr. Robin Köck (University Hospital Münster, MedVet-Staph), Dr. Antina Ziegelmann (BMG), Dr. Anke Schröder (BMEL), Dr. Martina Scharlach (Lower Saxony State Health Authority) and Prof. Dr. Lothar Kreienbrock (TiHo Hannover, RESET) One of the issues that concerned them all was the preservation of databases and other infrastructure after the completion of a project or network. 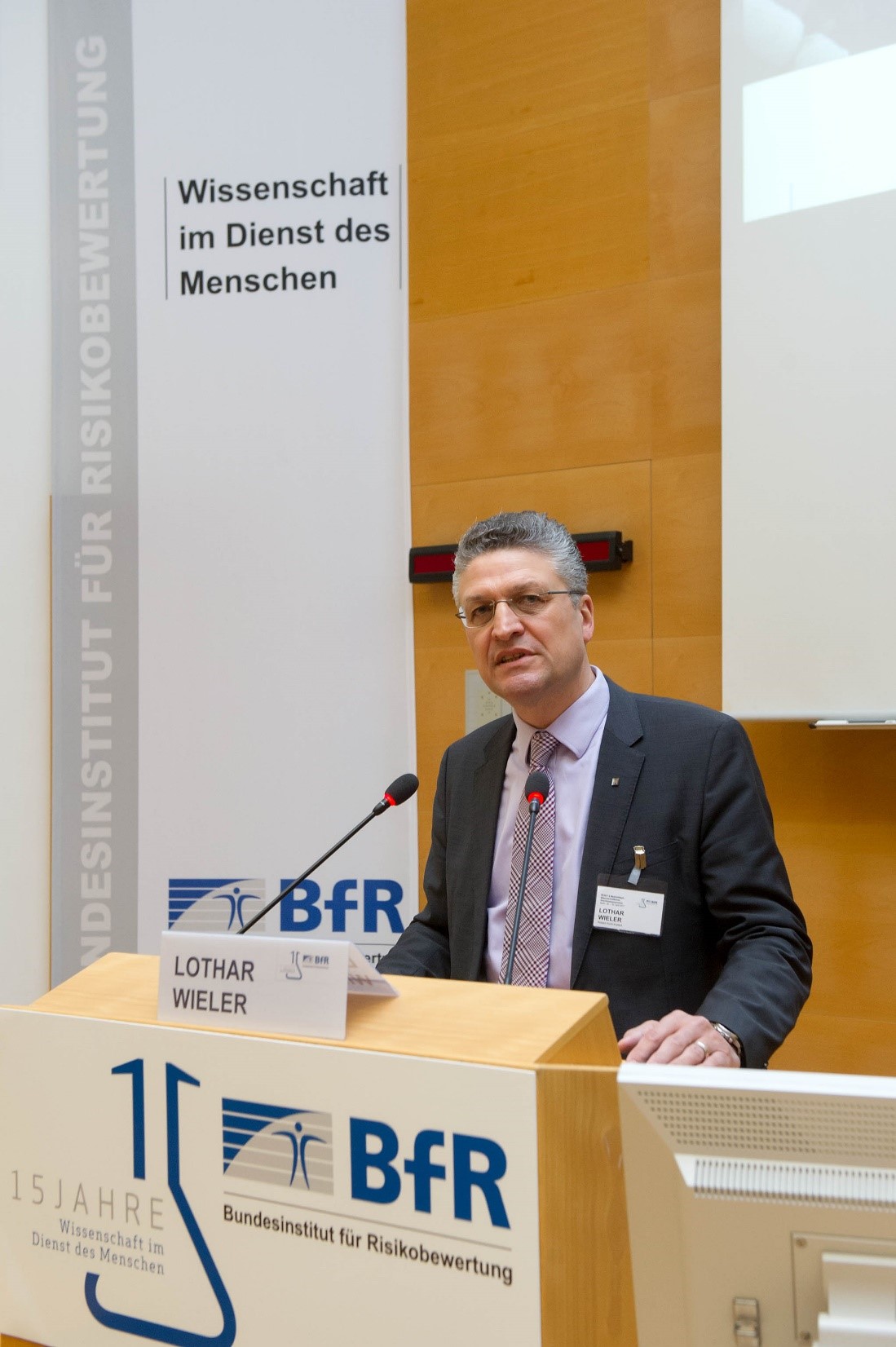 Prof. Dr. Lothar Wieler, President of the Robert Koch Institute, gave a keynote speech in which he reported on the development and transmission of resistance in bacteria, among other things. He pointed out that resistance mechanisms are part of the evolution of bacteria and are older than anti-infective drugs of modern times. 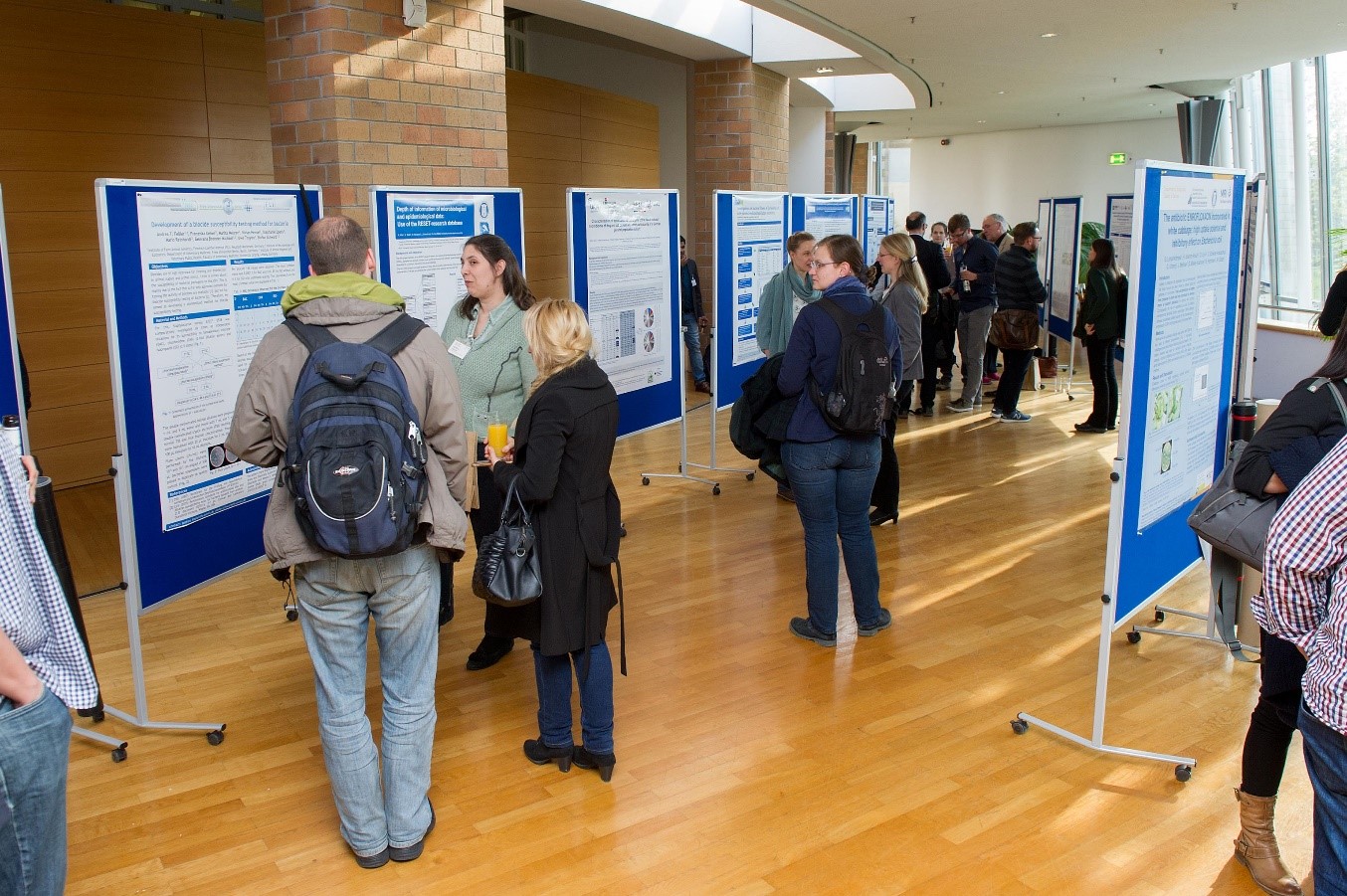 Many scientists presented their research results on posters that could be viewed during the breaks. The authors were available for technical discussions. 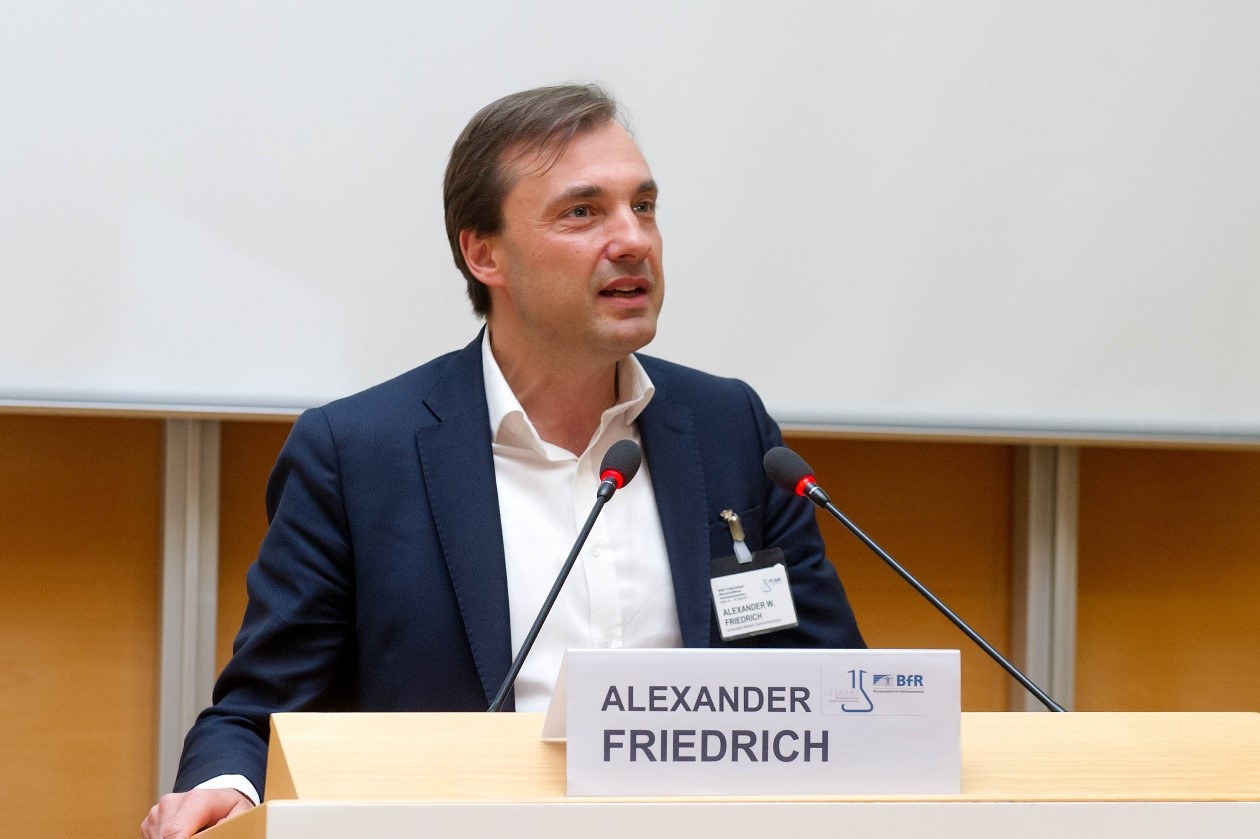 Prof. Dr. Alexander Friedrich reported on the resistance problem and the clinical, scientific and political handling of it in the German-Dutch border region.